Graphene is light, super strong and can lessen the CO2 footprint of cement.

Sir Isaac Newton famously wrote, “If I have seen further than others, it is by standing on the shoulders of giants.” A giant in the natural sciences, Newton knew sustainable progress is only possible through building on incremental advances.

In November, the 2021 United Nations Climate Change Conference (COP26) took place in Glasgow, Scotland—a handful of hours away from Newton’s family home. During the conference, over 40 of the world’s leading cement and concrete manufacturers pledged to cut carbon emissions 25 percent by 2030, as part of a wider commitment to achieve net zero by 2050.

Reducing the CO2 footprint is key to the cement and concrete industry’s goal, yet in a scientific irony, adding a little bit of carbon to concrete will go a long way toward reaching that goal. Mike Bell, CEO of First Graphene Ltd. (https://firstgraphene.net), cites numerous academic works over the past several decades that clearly indicate measurable strength improvements in concrete with the addition of various forms of carbon. However, the challenge is how to scale up from academia and practical applications.

This column has outlined the efforts of several innovative companies to combine carbon in various forms with ready mix concrete to help green up the ledger. While the consensus approach is direct carbon injection, it is critical to have even distribution of a very small amount of carbon in the bulk material to maintain uniform material properties.

GRAPHENE AS AN ADDITIVE
Graphene is an allotrope of carbon. In its purest theoretical form, it consists of a single layer of carbon atoms arranged in a two-dimensional honeycomb lattice structure. Graphene’s sp2 hybridization and very thin atomic thickness (0.345 nm) enable it to break records in terms of strength as well as electricity and heat conduction.

Bell’s research team initially undertook several large-scale validation trials to directly mix graphene in concrete with “mixed” results—no pun intended. Some trials showed spectacular strength increases while others saw little improvement. Post-trial analysis indicated a strong correlation between strength improvement and the degree to which the graphene is evenly distributed in the mixture.

PIVOTING TO CLINKER
Instead of digging in their heels to force a solution, the researchers instead took a note from Newton. They figuratively stood on the shoulders of prior work and went upstream to find a place for graphene in the manufacture of portland cement.

Working with several global cement additive manufacturers, Bell’s team focused on developing a graphene-enhanced grinding agent for clinker. Cement clinker is a solid material that is formed by sintering (fusing together without melting to the point of liquefaction) limestone and a second material that contains clay as a source of aluminosilicate. Sintering is energy-intensive, making it responsible for much of portland cement’s heavy carbon footprint.

WHY DOES THIS MATTER?
Let’s say the original cementitious product was 80 percent ground clinker and 20percent other constituents with a much lighter carbon footprint, like limestone. Bell says higher-strength clinker (thanks to graphene) allows less to be used by volume. Now 80/20 might become 70/30, replacing 10 percent of the high-carbon clinker with low-carbon limestone.

Testing is ongoing, and viable commercial applications are being trialed with the world’s largest commercial company for grinding aids and chemicals. It is important to note that, like all grinding agents, each cement processing facility will require a custom formulation to match the constituent material chemistry.

Bell says the EBITDA question is a wash. Essentially, the graphene grinding agent’s higher cost is offset by the reduced grinding time and the ratio of lower-cost material substitution for clinker. As with any innovation, the real need for adoption is demand.

The ready mix concrete industry has a role to play. At present, many infrastructure projects require a reduced carbon footprint for successful bidding and impose hefty penalties if the goals are not met in a verifiable fashion. One of the easiest compliance methods is to use a certified low(er)-carbon portland cement, and our job is to place this demand on cement suppliers.

The energy question remains: Are we just exchanging one polluter, in whole or in part, for another? Electricity is the largest cost component for the transition of high-quality carbon to graphene via electrochemical exfoliation. Right now, the electricity comes from traditional sources. Bell’s team has developed a roadmap to transition to cleaner, sustainable sources including wind and solar.

The First Graphene team came up with an eloquent solution by taking a step back to find the truth. They applied the best of Newton’s laws and principles: “Truth is ever to be found in simplicity.” If graphene in portland cement proves to work as Bell’s early research indicates, they nailed it. 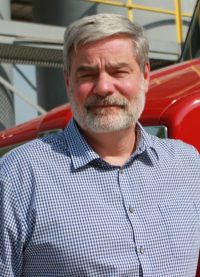