Sources: American Concrete Institute, Farmington Hills, Mich.; CP staff The American Concrete Institute has expanded the scope of ACI 301-20, Specifications for Concrete Construction, to include internal curing, mineral fillers and recycled aggregates, along with evaluation requirements for elements cast with self-consolidating mixes and structures with defined modulus of elasticity requirements. Compliance details throughout the document have been updated to… 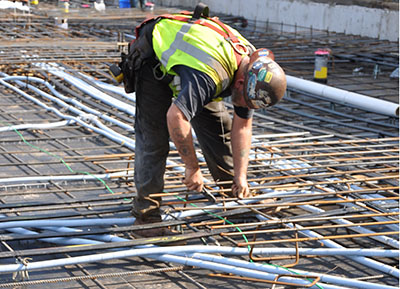 ACI is accepting feedback through February 6 on the proposed ACI 318-19: Building Code Requirements for Structural Concrete, the draft posted here. The new edition will be the first since a reorganized format was published in 2014 and include new or updated provisions on transverse reinforcement and shear in wide beams, hanger reinforcement, bi-directional interaction of one-way shear, and reference to ACI certifications. Existing provisions expected to receive significant updates and clarifications include two-way shear strength, ordinary walls, seismic loads, reinforcement detailing, analysis, and numerous materials requirements. Analysis methods for two-way slabs and provisions on shear heads and composite concrete columns are expected to be removed.

ACI is projecting attendance of 2,000-plus engineers, architects, contractors, educators, manufacturers, and material producers from around the world for the Concrete Convention and Exposition, October 15-19 in Anaheim, Calif.

The American Concrete Institute’s Presidents Series of webinars debuts February 7 with “ACI 318: What’s in Your Spec?” William E. Rushing Jr., P.E., FACI, will discuss the importance of specifications in realizing designer intentions for the concrete being placed and constructed. 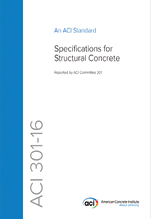 The American Concrete Institute announces the availability of two primary documents for concrete industry professionals: ACI 301-16 Specifications for Structural Concrete, and the ACI Field Reference Manual. The former is a reference specification an architect or engineer can apply to any job involving structural concrete by citing it in the project specifications. Mandatory and optional requirements checklists assist design and engineering professionals in supplementing the provisions of this specification as required or needed by designating or specifying individual project requirements.

In accordance with its standardization procedure, ACI has opened public discussion for the completely reorganized ACI 318-14, “Building Code Requirements for Structural Concrete and Commentary,” with comments on the document relayed through an official submittal form by June 17.