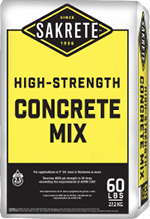 World of Concrete 2017 attendees were among the first to see a new Sakrete packaging scheme rolling into dealer and home improvement retail channels throughout the first quarter. New graphics for paper and other packages extend a logo unveiled in 2016 for the brand’s 80th anniversary. Sakrete showed early products bearing the scheme as part of its World of Concrete exhibit at the Las Vegas Convention Center. Along with new packaging, the producer unveiled a concrete mix specially formulated for countertops.