With Ethereum’s blockchain radical overhaul, look for digital currency to come to an industry near you.

We have all heard of the cryptocurrency called bitcoin. Ether (ETH) is the second most popular cryptocurrency, and it’s about to expand into vastly new areas thanks to a recent development with the platform on which it is used: Ethereum. The Latin word aether can be considered the etymology of ether and Ethereum. It means the upper, pure, bright air that is everywhere. Let’s take a look at how and why that definition matters to us.

Ethereum is a blockchain and distributed platform with smart contract functionality that was conceived in 2013 by Vitalik Buterin, and it is completely open source. The platform is changing from “proof-of-work” to “proof-of-stake,” a network upgrade with a payoff that—while sparing you the technical details—will reduce the energy and time used for calculation by 99.9%. The initial conversion, or “merge,” happened September 15, 2022.

What this means is the cryptocurrency ether is now magnitudes cheaper and faster to use than competitors, such as bitcoin. Round-trip transactions take seconds. The network conversion has reduced annual energy consumption for ether calculations alone by around 100 terawatt hours—or the total electricity used by the entire state of Indiana in a year. Cool, but why does it matter for ready-mix concrete (RMX)?

A blockchain records transfers, but it also contains self-executing agreements that automatically take place when certain conditions are met. Any conditions. For example, in the ready-mix concrete industry, a project-specific blockchain could be restricted to only certified concrete contractors and become worthless if specified progress dates are not met.

“With the construction world moving toward digitization and real-time data, it would make sense to transact in the same manner,” says Kevin Garcia, general manager of Civil Specialty Solutions at Trimble.

There are significant advantages to combining a subset of contractual details into the very currency used for payment, while at the same time working outside the “friction” of commercial banking institutions and currency-clearing systems. This is why world powers like Russia, China, India and others are racing forward with blockchain variants. These players can escape the reach of U.S. regulations and those imposed by the Society for Worldwide Interbank Financial Telecommunication (SWIFT). They also can control who uses their digital currency and when, how and where it is used.

Cryptocurrency entry points in RMX
Suppose a material producer sets up a variant of ether cryptocurrency—let’s call it ETH-RMX—that is tied to the U.S. dollar and empowered through the company’s mobile app. Customers could pay and vendors could be paid with ETH-RMX. However, they would most likely refuse to use this digital currency. It would be a hassle to transact with one producer in a radically different manner.

Scale and trust are required to make a currency work. The U.S. dollar is the international currency because it’s used everywhere and (despite our political foibles) is trusted precisely because it’s accepted globally. The same type of scenario would have to take hold for a market-specific cryptocurrency.

This may happen if a gigantic international organization that’s focused on all aspects of construction sets up a variant—let’s call it ETH-CON—and, again, probably ties it to the world’s currency: the U.S. dollar. Now the entire ecosystem can purchase and bill in ETH-CON, shining a light on all prior details, free from the friction inherent to local and international monetary systems and with the ability to bake in contractual details.

The adoption tipping point is with the large material suppliers and the large infrastructure owners. They can ask the trusted cryptocurrency host organization to create a use-specific, one-time variant for a small fee. We’ll call it ETH-CON:XYZ. This would bake in time, progress, and delivery requirements for any transaction, which could impact the value of the transaction if they are not met.

Material providers will have incentives to use ETH-CON:XYZ to purchase abroad from suppliers working in less-than-stable nations. Infrastructure owners (of skyscrapers, roads, bridges, dams, etc.) could be assured of progress. Equipment manufacturers who supply the industry with assets like tracked vehicles and plants would also have compelling reasons to use ETH-CON:XYZ. The list goes on.

A top executive in one such company, who wishes to remain anonymous, wisely suggests “publicly traded companies with high levels of financial governance will not move until there is a proven, secure and ‘approved’ system.”

Eventually the bookends of suppliers and infrastructure owners, combined with scale and trust, will pressure the middle—in our case, ready-mix producers—to participate. Over time, this would even reach concrete contractors and finishers.

Ethereum is leading the way to make the mechanics of cryptocurrency economical for not only broad-based use but also market-based use. Combining historical transparency, payment and contract into one, the economies of the tool are game-changing. Ethereum could soon be brightly flowing everywhere in our industry.

KEY BENEFITS OF USING BLOCKCHAIN AND CRYPTO FOR PAYMENTS 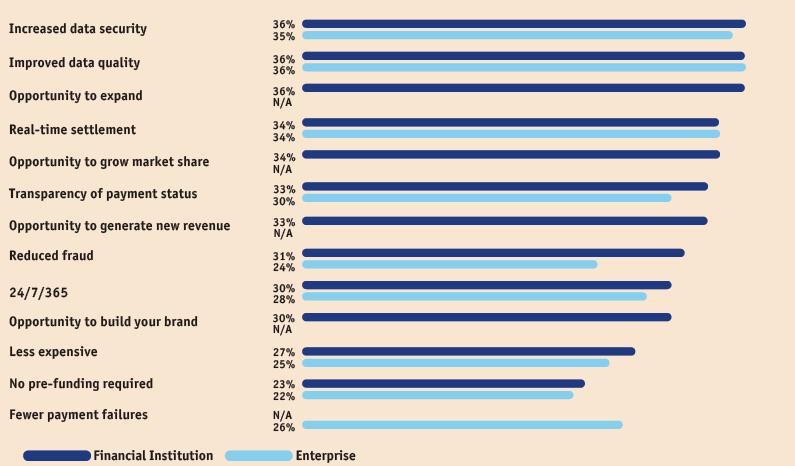 Blockchain is being used as a pathway in voluntary carbon credit markets. Businesses seeking to meet sustainability goals can purchase credits representing carbon dioxide emissions reductions or removal. CarbonCure Technologies is a carbon-removal specialist that partners with producers to permanently store CO2 in concrete slabs, structures or products and reduce cementitious material volume in mix designs. Working with Ripple, Hut8 and other blockchain leaders to sell carbon credits through their platforms, CarbonCure then shares the resulting revenue with its producer partners to reward and further incentivize their use of its processes. 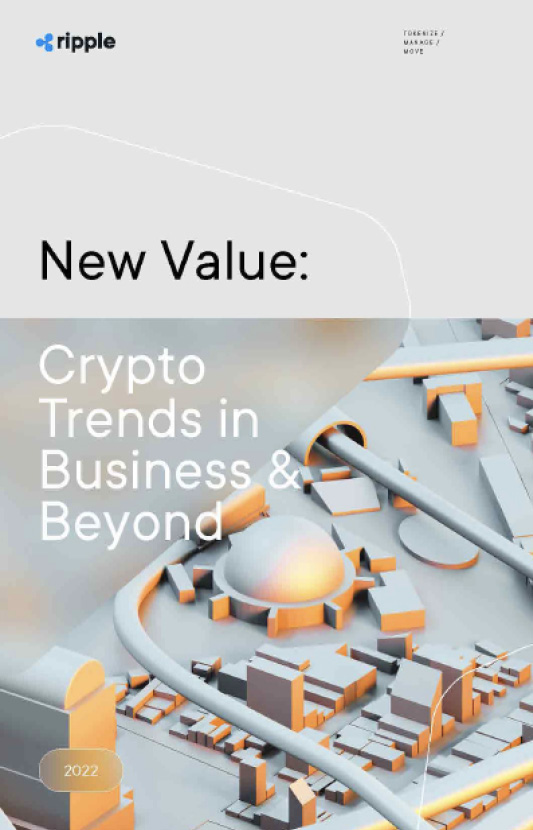 In its latest report, “New Value,” (right) San Francisco-based Ripple outlines crypto technology uptake among consumers and businesses. The authors charted results of a business survey (above) asking Financial Institution and Enterprise respondents: “What do you see as the key benefits of using blockchain and cryptocurrency for payments?” The report is posted at www.ripple.com.