“Clearly, the government-registered apprenticeship system is not meeting the industry’s need for skilled labor and cannot be the only solution supported by government to meet industry demands and build a diverse workforce,” says ABC Vice President of Regulatory, Labor and State Affairs Ben Brubeck. “This is why lawmakers should support inclusive, all-of-the-above solutions to workforce development as part of their efforts to attract and retain a diverse construction industry workforce, especially during these economically challenging times.

“Government-registered apprenticeship programs (GRAP) are only a key part of an all-of-the-above solution to workforce development,” Brubeck explains. “ABC’s 68 chapters are educating craft, safety and management professionals using innovative and flexible learning models like just-in-time task training, competency based progression and work-based learning in addition to more than 300 federal and state GRAPs across 20 different occupations in order to develop a safe, skilled and productive workforce. In addition, ABC member companies administer hundreds of GRAPs independent of ABC’s network and invested an estimated $1.6 billion in construction workforce development in 2021.”

APPRENTICESHIP PROGRAM BIAS
The White House and certain federal and state lawmakers push misguided solutions to the construction industry’s skilled labor shortage by promoting policies that steer workforce development funding only to GRAPs and require contractors to participate in such programs as a condition of winning taxpayer-funded construction projects, ABC contends. Some of the policies go as far as requiring GRAPs to be affiliated with unions in order to access government funding and qualify firms to participate in the procurement process. Such policies could prove detrimental in the short and long term for the construction industry by limiting workforce development, damaging the GRAP system and denying high-paying career opportunities in the construction industry to hardworking Americans.

Certain lawmakers only want to support GRAPs because they disproportionately favor unionized contractors and union labor, notes ABC, while union lobbyists want GRAPs to be the only workforce development solution supported by government because it can serve as a barrier to fair and open competition.

In consort with controversial policies mandating anti-competitive and inflationary union-only project labor agreements on federal and federally assisted infrastructure projects, the White House-led push for GRAPs will continue to exacerbate the construction industry’s skilled labor shortage. ABC, on the other hand, supports the Training America’s Workforce Act, which would allow for the federal recognition of industry and market-driven apprenticeship programs in the United States through third-party entities, approved by the DOL, to recognize and perform oversight of apprenticeship programs developed by the private sector. Additionally, ABC supports the Freedom to Invest in Tomorrow’s Workforce Act, which would expand 529 plans for all recognized post-secondary credentials as defined by the Workforce Innovation and Opportunity Act and the Jumpstarting Our Businesses by Supporting Students Act, which would expand Pell Grant eligibility to cover high-quality and rigorous short-term job training programs.

ONLINE UNION REPRESENTATION VOTING
A new Coalition for a Democratic Workforce (CDW) report, “Online Voting in Union Representation Elections: The Latest Attempt to Eliminate Workers’ Right to Secret Ballots,” highlights the perils of the National Labor Relations Board implementing electronic means for collective bargaining unit members to cast ballots in organizing campaigns. It calls on Congress to reject a House FY 2023 appropriations bill provision for the Departments of Labor, Health and Human Services requiring the Board to craft a system for conducting union representation elections online.

“The provision is the latest attempt in a two-decade-long effort by unions and their allies in government to eliminate secret ballots,” says CDW Chair Kristen Swearingen. “Secret ballots are a fundamental right in any democracy and provide voters with the ability to vote their conscience without influence from others, but if unions get their way and this provision is passed into law, workers will be forced to vote for or against union representation with union organizers and coworkers standing over their shoulders, pressuring them to support the union. Eliminating secret ballots would be a gross violation of workers’ privacy.”

“Electronic voting is a system ripe for coercion, intimidation, and harassment, and makes it impossible for the NLRB to safeguard the election,” she continues. “Moreover, as the report notes, the National Mediation Board, several states, and various foreign countries have all shelved online voting programs because of costs and cybersecurity concerns. For these reasons, the Supreme Court, other federal courts, and the NLRB itself have all recognized that secret ballots are the best method for determining the will of the workers.” 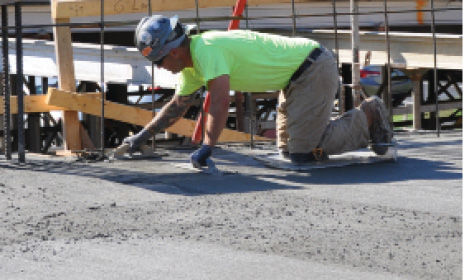 In the Covid-19 pandemic wake, construction crafts is proving to be one of the segments hardest hit by worker scarcity, according to a new PeopleReady Skilled Trades analysis. From March 2020 to December 2021, four million jobs were open in key skilled trades businesses, than double the amount of pre-pandemic vacancies.

Based on PeopleReady Skilled Trade’s review of thousands of present employment opportunities, positions with the most openings are Cement Masons and Concrete Finishers, Electricians, First Line

Supervisors, Painters and Roofers. As workers continue to age out of the skilled trades, fewer candidate successors enter the field. The data PeopleReady Skilled Trades analyzed shows that 40 percent of a 12 million-strong workforce are over the age of 45—nearly half that group 55-plus—while less than 9 percent of workers entering the trades are aged 19-24.

“With so few young workers joining the skilled trades, there is real imperative for employers to develop programs that will attract new talent, while investing in and retaining their existing workforce,” says PeopleReady Skilled Trades Executive Leader Jill Quinn. “With thousands of openings in the skilled trades today, employers who find innovative ways to instill a sense of belonging and pride within their workforce and the skilled trades as a whole will have a competitive advantage for the future.”

Tacoma, Wash.-based PeopleReady Skilled Trades, a specialized division of True Blue company PeopleReady, has announced a new loyalty program. Respect the Craft affords tradespeople an opportunity to earn rewards while being celebrated and recognized for dedication to careers and critically important roles. Participants can earn up to $1,500 in cash and have a chance to be named Tradesperson of the Year, a title accompanied by a $5,000 cash prize. — www.skilled.peopleready.com