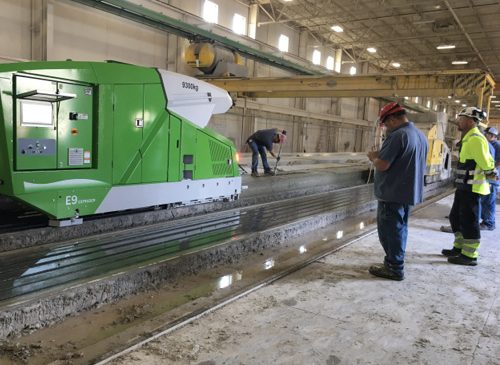 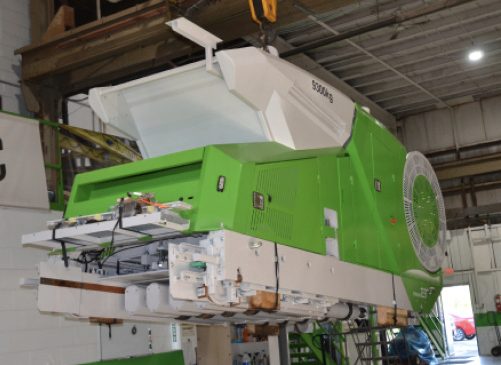 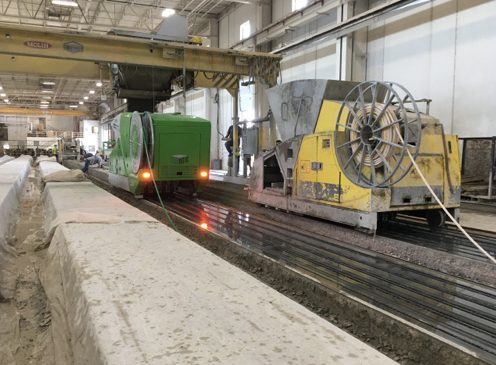 “We have two different profiles: 12-inch light and 12-inch heavy, plus other opitions,” says Vice President of Manufacturing Mike Rufenacht. “By using the new E9, we’ve been able to go from six beds of material up to eight, so we’re actually stripping two additional beds.”

Maintenance Supervisor Ben Lisowe describes the new machine as “miles ahead of where we were” and reflects on nearly 20 years of working with Elematic hollow core equipment: The machinery series has evolved from the labor-intensive 900 series model, running around 2-3 feet/minute; to the P7, running 4-5 feet/minute; and now the E9, which averages 7-8 feet/minute of normal casting. “We have run it up around 11 feet per minute, but ran into process constraints of getting concrete to the machine fast enough without it stopping,” he explains.

AUTOMATIC TROUBLESHOOTING
In addition to production speed and plank quality, Molin Concrete team members are on board with the E9 user interface. “The software on the machine is extremely user-friendly. If there is any issue, it will troubleshoot the issue for you. It will tell you what is wrong, and make it quick and easy to get back up and running,” observes Production Supervisor Mike Bruen.

From a maintenance point-of-view, the automatic troubleshooting is a great feature, affirms Lisowe. “If a door is left open, for example, it tells you on the interface screen where to go and what to check,” he says. “It makes it very easy for maintenance or production crew members; if they check something, and the door didn’t shut all the way, it’s very quick to get production up and running again.” The possibility of changing the settings while the machine is casting, he adds, bears noting: “You don’t have to pause to make an adjustment.”

MAINTENANCE EASE
Molin Concrete’s E9 has thus far required no work. “When the time comes that we have to do repairs, it’s going to be much easier to get access to all the parts and replace them,” notes Lisowe. The way the machine’s side plates are designed makes adjustments easy, he notes, while the underside of the machine—a multi-piece unit instead of a one large plate—will make parts replacement easier. The E9’s strand guide design, including electronic adjustment, eliminates the possibility of dropping a strand. All reinforcements are supported at the same time and same height.

“The production crew can drive to the E9, hook it up, and the machine automatically sets to the exact height,” Lisowe explains. “There are no hydraulic hoses that could break, or parts that can really wear out, because it supports the strand at such a large area.”

Variable speed drives impart another advantage in the E9, he adds: It’s quiet. Crew members used to need earplugs and had to shout to each other. Now, they can carry a standard conversation next to the machine as it runs.